The Observatory for the Protection of Human RightsDefenders, a partnership of the World Organisation Against Torture (OMCT) andFIDH, has received new information and requests your urgent intervention in thefollowing situation in Kazakhstan.

The Observatory has been informed by reliablesources about the sentencing in appeal of Mr. MaxBokayev[1], Head of the NGO“Arlan”[2] and a human rights defender workingfor the protection of the environment, freedom of expression and the fightagainst torture, and Mr. TalgatAyan, a lawyer and activist from Atyrau, Western Kazakhstan. Both humanrights defenders played a crucial role in organising peaceful protests thattook place last April and early May 2016 against the amendments to the LandCode of Kazakhstan[3]. 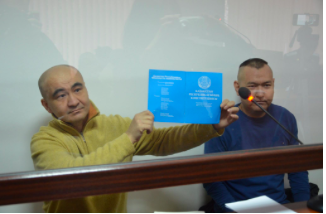 According to the information received, onJanuary 16, 2017, the appeal process began before the Criminal Division of theAtyrau Regional Court. After receiving ten motions from the defense lawyers,the Court decided to adjourn the hearing until January 18, 2017. A thirdhearing took place on January 19. Eight out of the ten motions were rejected.ff

On January 20, after four hearings, theCriminal Division of the Atyrau Regional Court announced its verdict confirmingthe sentencing in first instance by the Atyrau’s City Court No. 2 of Mr.Bokayev and Mr. Ayan to five years in prison for “institution of social discord” (Article 174 of theCriminal Code), “dissemination of knowingly false information” (Article 274)and “violation of the procedure of organisation and holding of meetings,rallies, pickets, street processions and demonstrations” (Article 400). Thisdecision can be appealed before the Supreme Court.

The Observatory strongly condemns the sentence against Messrs. MaxBokayev and Talgat Ayan as it considersthe charges to be trumped-up and used as a tool to retaliate both activists fortheir legitimate human rights activities, and calls upon the Kazakh authoritiesto release them immediately.

The Observatory further expresses its concernregarding the violations of the rights to a fair trial[4]and of the principle of equality of arms reported throughout the entirejudicial process against the two human rights defenders.

Between April and May 2016, several protests wereheld in Kazakhstan, gathering hundreds of citizens calling for the abolition ofamendments to the Land Code that were introduced in November 2015[5].During these protests many were detained and sentenced to administrativedetention for “preparation of illegal rallies” or “hooliganism”.

The Government launched a smear campaign via massmedia platforms accusing the protesters of planning violent attacks and blaminga Kazakh businessman, for leading the protest movement in order to plot a coupto destabilise the country.

On April 24, 2016, Mr. MaxBokayev participated in a peaceful assembly for which no authorisation had beenobtained. On May 6, 2016, Mr. Max Bokayev requested to hold a peaceful assemblyon May 21, 2016, but the authorities refused on May 16. The next day, on May17, Messrs. Max Bokayev and Talgat Ayan were arrested in Atyrau in retaliation for their critical statementsposted on Facebook and for making public their intention to participate andencouraging others to take part in the May 21 protests. On the same day, anadministrative court sentenced them to 15 days of administrative detention for“organising and holding peaceful assemblies” (Article 488 of the AdministrativeOffences Code) in violation of the laws of the Republic of Kazakhstan. Thishappened though the two had sent requests for authorisation to hold demonstrationson May 21 to the relevant local authorities in Atyrau, in accordance withdomestic laws.

On May31, 2016, one day before the end date of their administrative detention, the National Security Committee issued an ordercharging Messrs. Max Bokayev and Talgat Ayanwith the offenses of “preparation of a crime”, and “propaganda or public calls for seizure of power orretention of power or violent change of the constitutional order” under Articles 24.1 and 179.3 of the Criminal Code. On July 21 thesecharges were replaced with t“institution of social discord” (Article 174 of theCriminal Code), “dissemination of knowingly false information” (Article 274)and “violation of the procedure of organisation and holding of meetings,rallies, pickets, street processions and demonstrations” (Article 400).

On June 3, 2016, the Investigation Judge of Atyrau Court No. 2 remanded Messrs. Max Bokayevand Talgat Ayan for two months in pre-trial detention. Mr. Bokayev’s requestfor house arrest due to his critical health condition given that Mr.Bokayev suffers from a chronic hepatitis Cand needs constant medical care was rejected. On August 27, 2016, the judgedecided to extend the pre-trial detention. The Prosecutor argued that “MaxBokayev has a lot of friends inside and outside of Kazakhstan and so there’s afear that he will leave the country”.

On October 12, 2016, the trial against Messrs. Bokayev and Ayan startedbeforeAtyrau’s City Court No. 2. During the firsttwo hearings, most of the motions filed by the lawyers were dismissed by JudgeGulnara Dauleshova.

On October 17 and 18, 2016, the court decided to proceed with theexamination of the witnesses. The witnesses presented by the prosecutors wereallowed to testify via videoconference from a Court in Astana, despite motionsfiled by defence lawyers requesting that witnesses should be brought to Atyrau.Messrs. Bokayev and Ayan reported that due to the bad quality of the sound,they could not hear well what the witnesses were stating, thus affecting theirright to defence.

On October 18, Mr. Bokayev requested a break during the hearing, on thegrounds that he was not feeling well, but the judge dismissed his requestarguing that he was “simulating a faintness”.

On October 11, 2016, UN Special Rapporteur on the rights to freedom ofpeaceful assembly and association Maina Kiai submitted a legal analysis in thecase of Kazakhstan protester Max Bokayev. The Special Rapporteur emphasizedthat under international law, authorities cannot impose “authorization”requirements on those seeking to hold peaceful assemblies. Doing so turns thefundamental right to freedom of peaceful assembly into a privilege. Mr. Kiaialso highlighted the danger of vague laws being interpreted in ways thatcriminalize peaceful dissent[6].

The hearings of October 12, 13, 17 and 18were observed by a lawyer mandated by the Observatory. Important proceduralviolations amounting to breaches of internationally-recognised fair trialstandards were recorded by the trial observer[7].

They were sentencedto five years in prison with the prohibition to engage in social activities forthree years under Article 174 Part 2, five years under Article 274 Part. 4, andto a fine of 250 MCI (530,250 tenge, approx. 1,466 EUR) under Article 400. Bythe rule of absorption of less severe punishment by more severe punishment, thefinal punishment of the two defenders is of five years' imprisonment in a penalcolony of ordinary regime. The court also ordered thedefendants to pay an amount of 259,000 tenge (approx. 716 EUR) as proceduralcosts. Messrs. Max Bokayev and Talgat Ayan's lawyers appealedthe sentence.

Please write to the authorities of Kazakhstan asking them to:

i. Guarantee in all circumstances the physical andpsychological integrity of Messrs. Max Bokayev and Talgat Ayan, as well as ofall human rights defenders in Kazakhstan;

ii. Release Messrs. Max Bokayev and Talgat Ayan immediatelyand unconditionally, as their detention is arbitrary since it only aims atsanctioning their legitimate human rights activities;

iii.Put an end to all forms of harassment, including at the judicial level, of Messrs. Max Bokayev and Talgat Ayan aswell as of all human rights defenders in the country so that they are able tocarry out their work without hindrance;

iv. Repeal legal provisions limiting freedom ofpeaceful assembly beyond the narrow restrictions permitted under internationalhuman rights law, particularly with the aim of ensuring that this right is nolonger subjected to the permission of government authorities and merely toprior notification;

v. Repeal legal provisions limiting freedom ofexpression beyond the narrow restrictions permitted under Article 19 of theICCPR, including the vague and broad definition of the offence ofincitement to “social, national, clan, class or religious discord” in Article174 of the Criminal Code;

vi. Comply with all the provisions of the UnitedNations Declaration on Human Rights Defenders;

vii. Ensure in all circumstances respect for humanrights and fundamental freedoms in accordance with international human rightsstandards and international instruments ratified by Kazakhstan.

Please also write to the diplomaticmission or embassy of Kazakhstan in your respective country.

The Observatory for the Protection of Human RightsDefenders (the Observatory) was created in 1997 by the World OrganisationAgainst Torture (OMCT) and FIDH. The objective of this programme is tointervene to prevent or remedy situations of repression against human rightsdefenders. OMCT and FIDH are both members of ProtectDefenders.eu, the European Union Human Rights DefendersMechanism implemented by international civil society.

[1] Mr. Max Bokayev is a member of theExtractive Industries Transparency Initiative (EITI) since 2011, a member ofthe “Zhanaozen-2011” International Committee under the “Journalists in Trouble”Public Foundation, the initiator of the “Azat” Coalition (freedoms andliberties on the Internet), and an active participant in the National PreventiveMechanism (NPM) on the prevention of torture in prisons. In 2016, he wasappointed as head of the NPM regional group in Atyrau oblast.

[2] Arlan focuses on public scrutiny over governmental actions and theright of citizens to participate in public life, environmental protectionespecially in the context of the operation of oil companies, and various socialissues both at the local and national levels.

[3] On May 12,2016, Mr. Max Bokayev was invited by the Government to join a Land Code ReformCommission that had been established to review the law following severalpeaceful rallies across the country. However, he refused arguing that membersof the Commission should not be nominated by the government but by Kazakhcitizens and that the government should put an end to all acts of harassmentagainst those protesting the Land Code reform.

[4] Violations of the rights of the accused,including proceedings before an independent and impartial court; to adequatetime and facilities to prepare a defence, to examine witnesses, to translatedocuments, also the right to equality before the courts.

[5] In November2015, draft amendments to the Land Code, aiming at facilitating the lease ofagricultural land by foreigners were presented to the Parliament in Kazakhstan.The amendments were adopted and should have entered into force in July 2016.Protesters contended that the changes infringed upon the rights of Kazakhcitizens and landowners.

[6] See theLegal Analysis submitted by the UN SpecialRapporteur on the rights to freedom of peaceful assembly and of association,Maina Kiai, in the case of Max Bokayev: http://freeassembly.net/wp-content/uploads/2016/10/UNSR-Maina-Kiai-letter-in-Kazakhstan-Max-Bokayev-case.pdf

[7] Inparticular, the key evidence provided by the prosecution was based on expertiseprovided by official experts representing the Center for Forensic Expertiseunder the Ministry of Justice of Kazakhstan. These experts, politicalscientists, philologists and psychologists analyzed texts placed on Messrs.Bokayev and Ayan Facebook pages including their posts and comments of otherpeople, and made conclusions that they incited social discord between suchsocial groups as “society and authorities” or “people and members of theParliament or police”. ​