Paris-Geneva, February 15, 2017 – A Kyrgyz court ruled to upholdhuman rights defender Azimjan Askarov’s life sentence, after what was a mockretrial falling short of basic fair-trial requirements and running againstUnited Nations recommendations to release him, the Observatory for the Protectionof Human Rights Defenders (an FIDH-OMCT partnership) reported today (the report is available in English and Russian).

The Chuy Regional Court, which reconsidered Azimjan Askarov’s case in appeal from October 4, 2016 to January24, 2017, upheld the 2010 verdict which had been issued in a trial marred by aflawed investigation, bias, lack of substantial evidence and allegations oftorture and the absence of investigation thereof. In its decision published inApril 2016, the UN Human Rights Committee requested the authorities to releaseAzimjan Askarov and quash his conviction. Neither of the recommendations werebrought into effect. 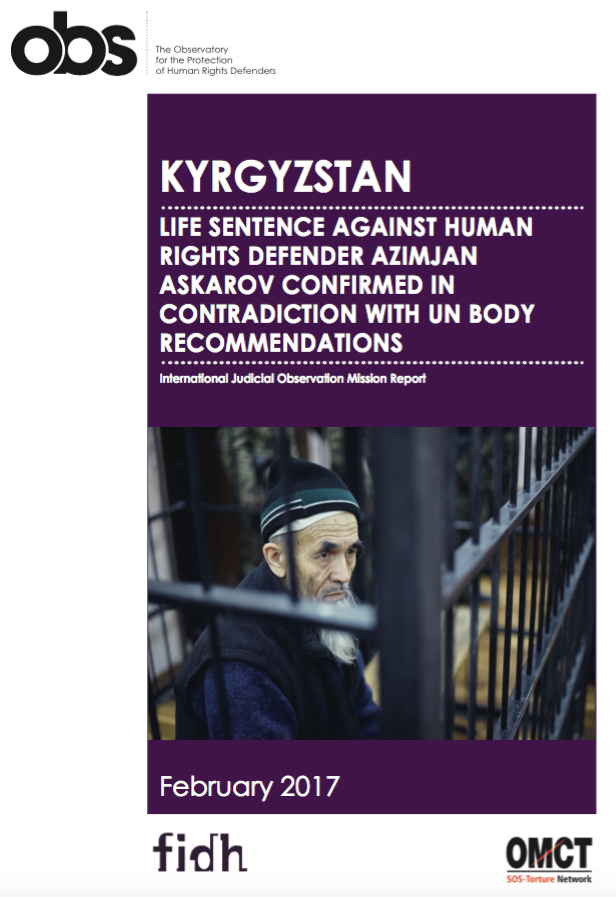 Moreover, the Chuy Regional Court itself, by refusing to hear somedefence witnesses, restricting access to the courtroom, failing to investigatecredible allegations of torture and ignoring acts of pressure and intimidationtargeting defence witnesses and lawyers, failed to guarantee Askarov’s right to a fair trial in accordance withinternational human rights standards.

“Kyrgyzstan has also made a complete mockery of itsinternational human rights obligations,” said Gerald Staberock, OMCT SecretaryGeneral. “If this countrywants to be a European trading partner it has to be clear to it that it has tobehave very differently.”

Tomorrow, President Atambayev is scheduled tomeet with European Union (EU) leaders in Brussels, including EU Foreign AffairsChief Federica Mogherini, European Council President Donald Tusk and EuropeanCommission President Jean-Claude Juncker, to discuss a new Agreement onPartnership and Cooperation and a Memorandum of Understanding on a 13 millioneuros worth project aimed at supporting judicial reform in Kyrgyzstan. Shortly after the court’s decision on January 24, 2017, UN bodies and the EU voiced seriousconcerns over the “serious shortcomings” in Kyrgyzstan’s judicial system, recalling that “full compliance with its international humanrights obligations, including the opinions of the UNHRC, is essential tomaintain the international standing of the Kyrgyz Republic”.

“The arbitrary character of Azimjam Askarov’s detention isunquestionable. EU leaders must take the opportunity of President Atambayev’s visit to remindhim of Kyrgyzstan’s human rights commitments and the need to demonstrateat the highest level the will to support a genuine judicial reform. Support tojudicial reform is meaningless if the right to a fair trial is not guaranteedand justice remains vulnerable to political interference,” said Souhayr Belhassen, FIDH Honorary President.

Azimjan Askarov is a human rights defender from the South ofKyrgyzstan where he had been investigating police brutality from 2002 to 2010.He was arrested on June 15, 2010, in the immediate aftermath of violentinter-ethnic confrontations opposing Kyrgyz and Uzbek communities. He wascharged with participating in mass unrest, inciting ethnic strife, illegalweapons possession, complicity in the murder of police officer Myktybek Suleimanov, attempted murder of otherpolice officers and incitement for taking hostage a mayor. Azimjan Askarovargued that he was not present on the bridge where the attack on Mr. Suleimanovoccurred. His claim was corroborated by several testimonies.

From thevery beginning of the judicial proceedings in 2010, the case against AzimjanAskarov, built on testimonies extracted under torture and on statements fromKyrgyz police officers whose work had been under the scrutiny of AzimjanAskarov, was marked as politically motivated. As reported by the Observatory in“Kyrgyzstan at a crossroads: shrink or widenthe scene for human rights defenders”, Mr. Kubatbek Baybolov, former Prosecutor General at the time of Mr.Askarov’s conviction recounted that Interim President Roza Otunbayeva hadinstructed the Judiciary to sentence Azimjan Askarov to life imprisonment. He added that the elements in thecriminal case failed to demonstrate Mr. Askarov's guilt.

The report is available

The Press Release is also available in Russian: Kyrgyzstan_2017.02.15_PR_Publication_RUSSIAN

TheObservatory for the Protection of Human Rights Defenders (the Observatory) wascreated in 1997 by FIDH and the World Organisation Against Torture (OMCT). Theobjective of this programme is to prevent or remedy situations of repressionagainst human rights defenders. FIDH and OMCT are both members of ProtectDefenders.eu, the European Union Human Rights Defenders Mechanism implemented byinternational civil society.