The Observatory for the Protection ofHuman Rights Defenders, a partnership of the World Organisation Against Torture(OMCT) and FIDH, requests your urgent intervention in the following situationin the Philippines. 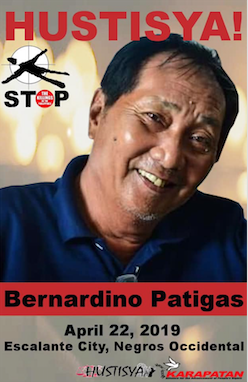 The Observatory has been informed by reliable sources about the killingof Mr. BernardinoPatigas[1], founder and Secretary General of the North Negros Alliance of HumanRights Advocates, a member organisation of the Negros chapter of the human rights non-governmental organisation (NGO) Karapatan- the Alliance for the Advancement of People’s Rights.

According to the information received, at around 4.30pm on April 22,2019, Mr. Bernardino Patigas, aka ‘Tatay Toto’, was fatally shottwice by a gunman whiledriving his motorcycle along the highway of Barangay Washington, EscalanteCity, Negros Occidental Province. Mr. Patigas died on the spot.

Mr. Bernardino Patigas was awell-known human rights defender who called for land reform and denounced the militarisationof communities and ongoing human rights violations in Negros. As a result of his human rights work, he repeatedly received threats and was subjected to harassment. InApril 2018, his name and picture, together with that of human rights lawyer Mr.Benjamin Ramos, who wassubsequently murdered on November 6, 2018[2], and 60 otherindividuals and rights advocates, were included in a poster of allegedcommunist personalities.

On the same day, following reports of Mr. BernardinoPatigas’ killing in the media and on social media, a death threat via textmessage from an unknown person was sent to Ms. Cristina Palabay, Kaparatan Secretary General, Ms. Clarizza Singson,Karapatan-Negros Occidental member, and various other community leaders inNegros, insinuating that the names included in the message were targets to bekilled within the year.

The Observatory condemns in the strongest terms the killing of Mr.Bernardino Patigas and the subsequent death threats against Ms. Cristina Palabay, Ms. Clarizza Singson, andother community leaders in Negros, and urges the authorities of the Philippinesto carry out an immediate, thorough, impartial, and transparent investigationinto the above-mentioned events, and to identify all those responsible, bringthem before an independent tribunal, and sanction them as provided by the law.

Please write to the authorities of the Philippines asking them to:

i. Guarantee in all circumstances the physical integrity andpsychological well-being of Ms. Cristina Palabay, Ms.Clarizza Singson, and all members of Karapatan, aswell as all human rights defenders in the country;

ii. Carry out an immediate, thorough, impartial, and transparentinvestigation into the murders of Mr. Bernardino Patigas and Mr. Benjamin Ramos in order toidentify all those responsible, bring them before an independent tribunal, andsanction them as provided by the law;

iii. Put an end to all acts of harassment against all human rightsdefenders in the Philippines, and ensure that they are able to carryout their legitimate activities without any hindrance and fear of reprisals;

iv. Conform to the provisions of the UN Declaration on Human RightsDefenders, adopted by the General Assembly of the United Nations on December 9,1998, especially its Articles 1 and 12.2;

v. Ensure in all circumstances respect forhuman rights and fundamental freedoms in accordance with international humanrights standards and international instruments ratified by the Philippines.

Please also write to the diplomatic missions orembassies of the Philippines in your respective country.

The Observatory for the Protection of Human RightsDefenders (the Observatory) was created in 1997 by the World OrganisationAgainst Torture (OMCT) and FIDH. The objective of this programme is tointervene to prevent or remedy situations of repression against human rightsdefenders. OMCT and FIDH are both members of ProtectDefenders.eu, the European Union Human Rights DefendersMechanism implemented by international civil society.

[1] Mr.Patigas was a survivor of the Escalante massacre of 20 farmers and farmworkers,which occurred on September 20, 1985. He subsequently joined human rightsadvocacy especially in favour of the Sakadas of Negros as well as fact-findingmissions in the region. At the time of his killing, he was running forre-election as a Sangguniang Panglungsod (city council) member in EscalanteCity.