The Observatory for the Protection of Human Rights Defenders, a partnership of the World Organisation Against Torture (OMCT) and FIDH, requests your urgent intervention in the following situation in The Philippines. 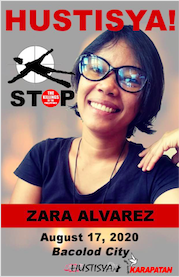 The Observatory has been informed by Karapatan - the Alliance for the Advancement of People’s Rights - about the killing of Ms. Zara Alvarez, Karapatan Paralegal in Negros Occidental Province and Research and Advocacy Officer of the Negros Island Health Integrated Program (NIHIP).

According to the information received, on August 17, 2020, at around 8pm, Ms. Zara Alvarez was fatally shot by unknown individuals along Santa Maria Street in Eroreco in Barangay Mandalagan, Bacolod City.

Ms. Zara Alvarez was a well-known human rights defender who received repeated threats and was subjected to harassment as a result of her human rights work. She was detained from October 30, 2012, to July 22, 2014, on trumped-up murder charges, which were dismissed for lack of evidence, on March 4, 2020. She was also among the frequently red-tagged activists in Negros Island, and in 2018 she was tagged as “terrorist” along with more than 600 individuals in a case filed by the Department of Justice[1]. Her name and that of many others were subsequently removed from the list, but the threats against her continued.

The Observatory condemns in the strongest terms the killing of Ms. Zara Alvarez and urges the authorities of the Philippines to carry out an immediate, thorough, impartial, and transparent investigation into her murder, to identify all those responsible, bring them before an independent tribunal, and sanction them as provided by the law.

The Observatory reiterates its utmost concern over ongoing killings and attacks against human rights defenders in the Philippines, and calls upon the authorities to adopt effective measures to ensure the protection of human rights defenders in the country, as well as to ensure proper investigations into such killings and attacks.

Please write to the authorities of the Philippines asking them to:

i. Guarantee in all circumstances the physical integrity and psychological well-being of all human rights defenders in the country;

ii. Carry out an immediate, thorough, impartial, and transparent investigation into the murder of Ms. Zara Alvarez in order to identify all those responsible, bring them before an independent tribunal, and sanction them as provided by the law;

iii. Put an end to all acts of harassment against all human rights defenders in the Philippines, and ensure that they are able to carry out their legitimate activities without any hindrance and fear of reprisals;

iv. Conform to the provisions of the UN Declaration on Human Rights Defenders, adopted by the General Assembly of the United Nations on December 9, 1998, especially its Articles 1 and 12.2;

· Mr. Rodrigo Duterte, President of the Republic of the Philippines, Email: op@president.gov.ph or send a message through http://president.gov.ph/contact-us/;

· Embassy of the Philippines in Brussels, Email: brusselspe@gmail.com.

Please also write to the diplomatic representations of the Philippines in your respective countries.