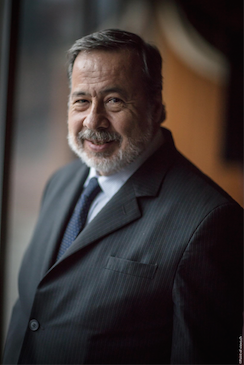 Geneva, 22December 2016 (OMCT) - A lawyer by training, Gustavo Gallón was drawn into humanrights work as a response to injustice, inequalityand authoritarianismtaking place in the name of counterinsurgency in war-tornColombia.

“Being a human rights defender is more away of life than a profession,” he said. “My motivation stems from an urge todo something to address the ills I witnessed in society.” A feeling that hasdriven him for the past 30 years.

The situation of Colombian human rightsdefenders has for many years been one of the worst in the world, in a contextcharacterized by extreme levels of violence and massive human rightsviolations.

In recent years, the peace talks between theGovernment and the FARC guerilla have led to a decreasein violence related to a conflict that has left more than 250,000dead, 60,000 forcibly disappeared, 27,000 kidnapped and nearly seven million displacedfrom their homes. Yet, murder rates,attacks and threats against defenders have paradoxically continued to rise. In 2016,at least 52defenders were killed in the country, and dozens of othershave been attacked or stigmatized as criminals or guerrilla sympathizers,notably for their work in support of peace.

Mr. Gallón himself has not been exemptfrom the dangers of speaking out against State abuses. As founder and Directorof the Colombian Commission of Jurists,one of the oldest and most prominent human rights organization in the country, hehas been the target of threats and acts of intimidation, including smearcampaigns and illegal surveillance. His family has also been monitored.

Humanrights: a cornerstone for lasting peace

Continuous State-sponsored attacks and campaignsagainst defenders have successfully swayed public opinion against thelegitimacy of their work.

“One of the main challenges we face is to overcome thedifficulty to understand why human rights matter, even amidst a bloody armedconflict,” Mr. Gallón said. “Despite recent progress, many still do not get whyit is important to defend human rights.”

Although abuses continue unabated, he is hopeful for the future of Colombia after the country recentlymoved a step closer to ending its 50-year conflict with the ratificationon November 30 of a revised peace agreement.

The role of human rights defenders inbuilding sustainable peace based on democratic values, justice and respectfor human rights in Colombia is essential. “If thisagreement doesn’t work we’ll have to work on another agreement. But above all,we have to insist on the need for the Government to take their human rights commitmentsseriously… This peace agreement is a very important opportunity to makeprogress in that direction.”

Thisarticle is part of a series of 10 profiles to commemorate International HumanRights Day, 10 December, and to recognize the vital role of human rightsdefenders worldwide.

OMCT wishes tothank the Republic and Canton of Geneva and the OAK Foundation for theirsupport. Its content is the sole responsibility of OMCT and should in no way beinterpreted as reflecting the view(s) of the supporting institutions.